SDSS Zhou Yu Akatsuki Gundam Release Date: October 2019 Price: 800 Yen No silver here, it's all gold. Gold and red. One of the coolest effects to come with any of these SDSS kits is the clear red plastic fire effect. #SDSS #SD #Akstsuki #ZhouYu

SDSS Sima Yi Destiny Gundam Release Date: October 2019 Price: 800 Yen If you wanted your Destiny Gundam to be even edgier and point, well you're in luck. Welcome to the Edge fest. #Gunpla #SD #sdsangokusoketsuden #hgdestinygundam 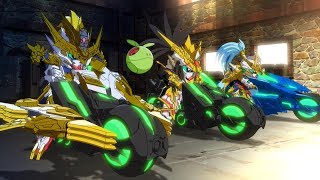