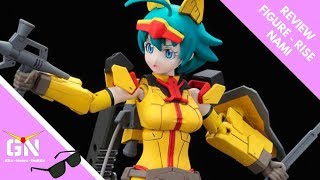 In his very first episode, EroMecha Sensei look for love and passion would he find it with Nami? #reviewnami #nami #builddivers #figurerise #hg

Having cleared the difficult Lotus Challenge, the Build Divers have earned the GBN world's greatest prize. As Riku and the other members consider how they can use it to achieve their individual dreams, Momo offers a proposal on a truly outrageous scale. #builddivers #16

The Build Divers decide to participate in a Battle-Random mission in which the matchups are randomly determined. Their opponent turns out to be a force called Hyakki, which includes Do-ji, against whom Riku won his first victory, and Ogre, who gave him his first taste of defeat. Riku's heart pounds with anticipation at the idea of assessing his growth by taking on Ogre, using the strength he's accumulated through his previous experiences. Meanwhile, Do-ji's own heart burns wi

The Build Divers have made a striking impression in their debut match, and now challenges from other forces are pouring in. Taking advantage of the opportunity, the members are about to choose an opponent for their next battle. Then Magee appears, informing them that there are things other than battles that only forces can do. #builddivers #episode #8

Riku and Yukio reflect on their first experience with GBN. They run into Momoka, who tries to get them to join the soccer club, but she is unable to stop them going back to GBN. Diving into the virtual cyberspace dimension again, they are reunited with Sarah, and instead of playing Gunpla Battle they choose a Collect mission whose goal is to collect a key item. #builddivers #episode #gundam